I took woodworking at school where I learned basic skills such as sawing, chisel, planing, sharpening and carving. After I left school I had some of my dad's tools which I supplemented with some basic tool purchases from an engineer's supply company where I worked at the time.

After I married we were not particularly well off so I decided to build a lounge suite to replace the various "fall apart" hand me downs. Since money was limited I used construction pine and selected pieces for their purpose. The lounge suite has long since gone to meet its maker so I cannot show you pictures of it. 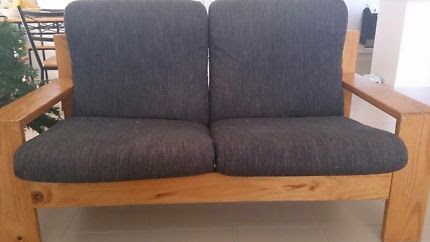 The arms were wide 5x2 and the legs were 3x1 1/2. The cross members were 3x1 1/2 and the back frame was about 3x1 I think and the slats for the back were 1/2" by 2" and morticed into the frame for the back. The joinery was all mortice and tenon. A lot of the wood sizing is guesswork at this stage since it was built over 35 years ago. It consisted of a 2/3 seater and two singles. The 2/3 was wide enough for 3 average sized people or 2 larger built people. The image here is vaguely similar in style just to give you an idea. The legs were set back. The legs were narrower than the arms and the arms were curved in at the front outer edges to make them narrower at the front which gave it more of a sculpted look.

All of the joinery was hand cut and used resin glue for strength. It was finished with several coats of clear semi gloss poly.

The front and rear cross members were slotted using a circular saw for seat bottom straps and the wife made cushions for it using blocks of foam.

As I recall it did not cost a lot to build, the timber was extremely cheap. I spent more on the glue, poly and sundry tools than the timber. I was rather pleased despite my rather rudimentary skills. I recall that my joints were not particularly skilfully done but they were sound. The only annoying aspect was that the slope on the back was too steep and when you sat down and leaned back it was difficult to actually get out of it. You did not have the web sites specifying good furniture angles and dimensions as you do today. I used a lot of guess work. However I was really pleased with it as a first attempt and there were some design aspects that I was rather pleased with.

It actually (IMHO) looked quite nice and with nice cushions it functioned quite well except for the too steep back angle. It looked in proportion and did not look either clunky or spindly. It looked and felt solid. I made the arms especially wide to take a cup of tea or glass of beverage so they were in effect mini tables. It held together quite well considering the battering it got from one house move, two adults and four children. I had it for maybe six or seven years before being replaced by another second hand hand-me-down, and maybe for some time after to server as a backup.

I have rather nostalgic memories of it despite its limitations and I may make another attempt at re-making it this time with a better ergonomic design, nicer wood, more skilled joinery and nicer cushions.
Posted by John Hancock at 3:28 PM No comments: