The scrub plane is not so much as a particular plan design so much as a method of preparing and using a regular bench plane. The purpose of a scrub plane is to easily remove a lot of stock to either thickness a board or to remove surface irregularities such as cupping or twist.

A scrub plane is identified by the severe radius on the blade, typically about 75mm. This allows the plane to rapidly remove a lot of wood very fast. In the past timber framers would use a scrub plane to size timbers for sockets or joints. Also cabinet makes would use a scrub plane to size timers before finishing them with the jointer and smoother. Any bench plane (except perhaps a jointer) could be made into a scrub plane by simply shaping the blade with a sharp radius. In fact many hand tool woodworkers keep separate blades for a bench plane with a severe radius to use as a scrub.

Since the scrub is pretty much "brute force and ignorance" it does not need any of the refinements and sophistication of your regular bench plane so Veritas has produced a bare bones plane that has a very simple body a single securing screw and an iron radiused at 75mm. They call this the Veritas Scrub Plane. 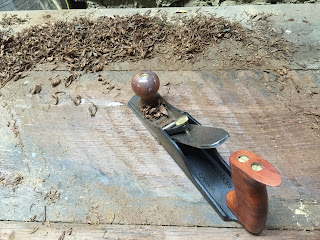 The body is about the same length as a jack so it is ideal for flattening boards as well as thicknessing. My old bench consists of three planks of 50x200x2000 jarrah and the centre plank has about a 2-3mm cup. I used my new Veritas Scrub Plane to flatten out this cup before smoothing it in preparation for jointing the edges for a glue up.

The scrub plane was a dream to use and made very short work of the section in the photo to the right.

I had a chance to pick up this plane second hand for the price of a quality plane iron which saves having to reset the plane every time I want to use a scrub plane.

The Veritas scrub plane is simple easy to use and is an excellent addition to the hand tool workers kit.

Posted by John Hancock at 6:55 PM No comments:

My ADSL modem was sitting on a music stand in the laundry And looking rather untidy with cables going every which way. A friend gave me the idea of making a custom shelf for it.

I have a load of jarrah paneling which was recovered from the Port Adelaide wool sheds in the 80s.

I took a piece of this, about 100 wide and 1200 long and cut it in three and jointed four edges. I then glued the two pieces together to make a piece that was about 250x400. I wanted the shelf to be about 200x300 wide. After resurfacing the faces on the thicknesser I cut out the piece to length and then cut it length wise which  gave me one piece for the top then another which I could glue to the bottom of the back edge which I could use to secure the shelf to the wall.

I wanted a cut out at the back to take the cables so I made a template which would make about a 25x50 mm  cut out on both pieces. This would allow all the cabes to be routed via the back of the shelf to keep it tidy. I had to buy a 40mm x 12 mm patten bit since my patten bit was not long enough. I secured the patten to the pieces using double sided tape and then routed out the recess. 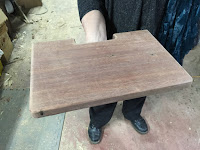 After scraping off the excess glue I used a small block plane to clean up any slight overlap of the joint. 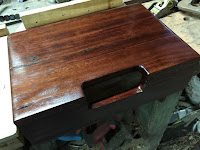 I finally sanded to 320 grit using a random orbital sander and applied 2 coats of a home made wiping oil varnish mix. This left a film of oil after it dried so I wiped that off using a clean cotton rag and then applied a finishing wax which I buffed in by hand using a cotton rag.

I mounted it to the gyprock with  some wall board fasteners. I did not bother locating it to the studs since the modem is just a few hundred grams. 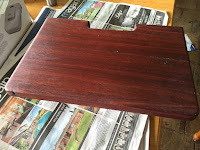 The wood ended up with a nice deep red look with a natural finish. It is not subject to rough treatment so I thought that this was sufficient.

The finishing touch was some flexible cable ducting to keep it looking tidy.

It still has the marks of the various uses that the wood has had over the years which speaks of the history of the wood. I took no pains to disguise that since it does not detract from its purpose and adds character to the whole project.

I have more ideas for how to reuse the wood I have recovered as well as other unused pieces that the original owner and builder (now sadly passed) has left behind. All of the projects will have a similar character and I may even make a mounted plaque telling the story, just an idea at the moment.

My next project using this wood is a little more ambitious and will be a bathroom cabinet with glass doors. 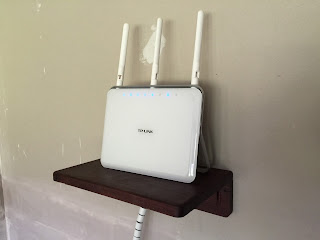 Posted by John Hancock at 6:14 PM No comments: