I have been looking for a bandsaw for a while now, or to be exact two bandsaws. I wanted a larger one for resaw and a smaller unit for cutting curves. There was a bargain 14" that went on Gumtree a month or so ago but I missed that one by hours.

On the other hand there was an old 24" cast iron monstrosity in Gumtree for a number of weeks. I looked it on numerous occasions but it never really struck me until I took a more detailed look. It appeared to be ok so I rang up and arranged to see it in person. It ran fine so I agreed a price ($350) and proceeded to try to get it onto my 6x5 trailer. An hour later and after some considerable exertion we had it loaded onto the trailer. Gee it is heavy! 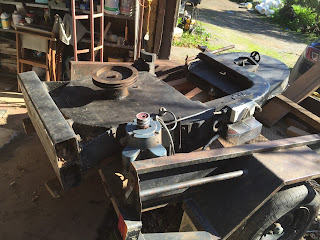 When I got it home I then began the task of extracting it from the trailer. I backed it up to the shed and started moving the band saw back off the trailer. A torn tendon in my right elbow did not make it any easier. When it was far enough back the base lowered onto the concrete of the shed. But it was still too heavy to lift up to the vertical. I then used some trailer tie downs secured to the shed beam to lift the top of the frame until it was balanced at which point I was able to easily move the band saw into a vertical position.

Two 6" square beams were welded to the base of the saw some time in the past and using these I was able to use a long wooden pole to maneuver the band saw round and get it onto some small round bars. Using the bars as rollers I was able to move the saw into position then I used the wooden beam again to get it into its final position and remove the rods. 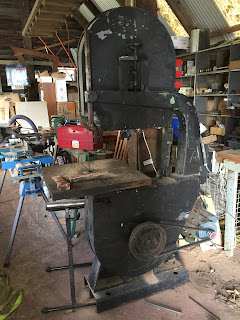 The saw had a 1" (25 mm) blade and a single phase 2.5 HP motor. My first few tests proved that the blade was blunt, covered in resin and the motor was under powered. The blade drifted randomly and quite markedly to the left which I believe was due to a nice band of resin on the left side of the blade, the side that rids on the wheels. On investigation it transpired that the run capacitor on the motor was open circuit which caused the motor to run at roughly half power. After replacing the capacitor ($16.50) the saw started to operate without the motor constantly cutting out. I sent the blade off to get sharpened for $15. I also ordered a 5/8" (15 mm) blade for $45.

The upper guide consists of a rear bearing and two blocks of mild steel angled down to about 45 deg. It was set quite well by the previous owner. The lower guide needs some attention since the rear bearing is seized. I am contemplating replacing both the lower and upper guides with bearing guides. Whether I make a custom assembly or buy one is yet to be decided. I quite like the idea of custom making something and I am sure I have the necessary skills to do this.

The lower cover is held on by two studs. Each stud was fabricated from a length of 3/4" round mild steel with a 1/2" W thread turned on either end. One end was screwed into the casting above either side of the lower wheel and the cover sat on the screws on the outer end of the studs on which was screwed using hand nuts to secure the cover. One of these studs was broken off in the casting. I used an easy out to remove the broken off stud from the inside of the saw. I then ground that end of the rod flat. I then used a drill and tap to create a 1/2" W thread in the stud. I cut a length of 1/2" threaded rod then re-secured the stud. However when I secured the cover it was rubbing on the lower wheel. I therefore placed a washer between the stud and the inner casting then another washer on the inside of the cover which spaced the cover perfectly.

The pulley cover (not pictured) no longer fits since it was designed for the original ,three phase motor which had a much lower mounting position. I would have to weld some studs or drill and tap new holes if I was to fit the cover to the machine as is. The other alternative is to weld some slotted mounts to make the cover adjustable.

All in all I am really pleased with the condition of the saw and how well it runs. It has a resaw capacity of just under 300mm and I think with a nice sharp blade I will not have any issues resawing very heavy timbers.

I am now in the market for a smaller saw for curved work.

Update: I got the blades back from the sharpener today and it cuts like butter with zero drift.

Posted by John Hancock at 5:57 PM No comments: